“Three components are necessary for human perception of color – a white light source, an object to view and a human observer. Each component must be represented as numbers to quantify human color perception.“

Abstract
Humans perceive color and appearance subjectively and differently, even with a trained eye. In a model for human color perception, the observer is represented as the human eye that receives light reflected or transmitted from an object and processed in the brain to become a color perception.
This application note is a review of the calculation of CIE X, Y, Z color values while “standardizing” the human observer as a numerical representation of what the “average person” sees.

In the 1920s two researchers from the UK, David 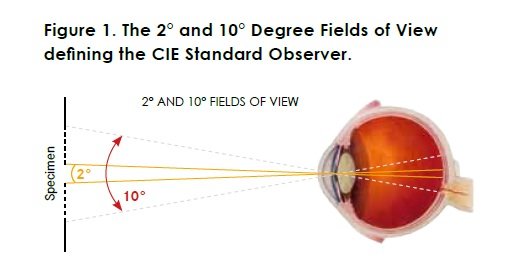 Wright and John Guild, performed color matching
experiments using human volunteers to develop
and quantify the color ability of a standard,
or average, human observer. In 1931 the CIE
published the 2° Standard Observer based on
their research. This Standard Observer is called 2°
because, during the color matching experiment,
subjects looked through a hole that allowed them
a 2° field of view. At the time it was believed that
all the color-sensing cones of the eye were located within a 2° arc of the fovea, located directly back
from the retina of the eye. The experiments were
performed by projecting spectral color lights from
across the visible spectrum onto a screen. Multiple
people matched each spectral color light using
a combination of red, green, and blue lights. The
curves generated from this visual experiment were
used to derive bar x, bar y and bar z functions,
referred to as the CIE 1931 2° Standard Observer.

By the 1960s, it was realized that cones in the 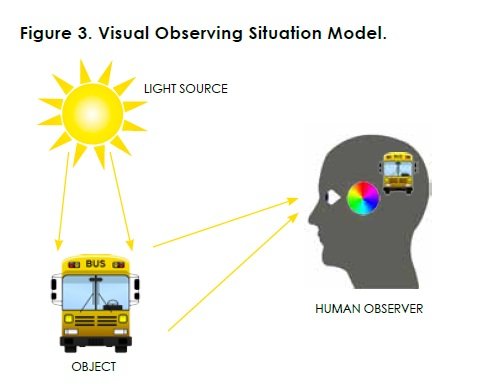 Today, the 1964 10° Standard Observer is recommended by the CIE as appropriate for most industrial color applications but the 1931 2° Standard Observer remains available as a measurement choice. The relative sizes of the two fields of view are shown in Figure 1.

The 1931 2° and 1964 10° Standard Observer functions are used in the calculation of color values to reflect the human response to the visible spectrum.

Note that X, Y, and Z include factors for the CIE standard observer in their formulas. All other colorimetric scales, such as Hunter L, a, b or CIE L*a*b*, are calculated from the CIE X, Y, Z color values.

Conclusion
This note was provided as background information to relate human color vision to instrumental color measurements. Using instruments to measure color perception creates an objective and precise method to
quantify color as perceived by humans.